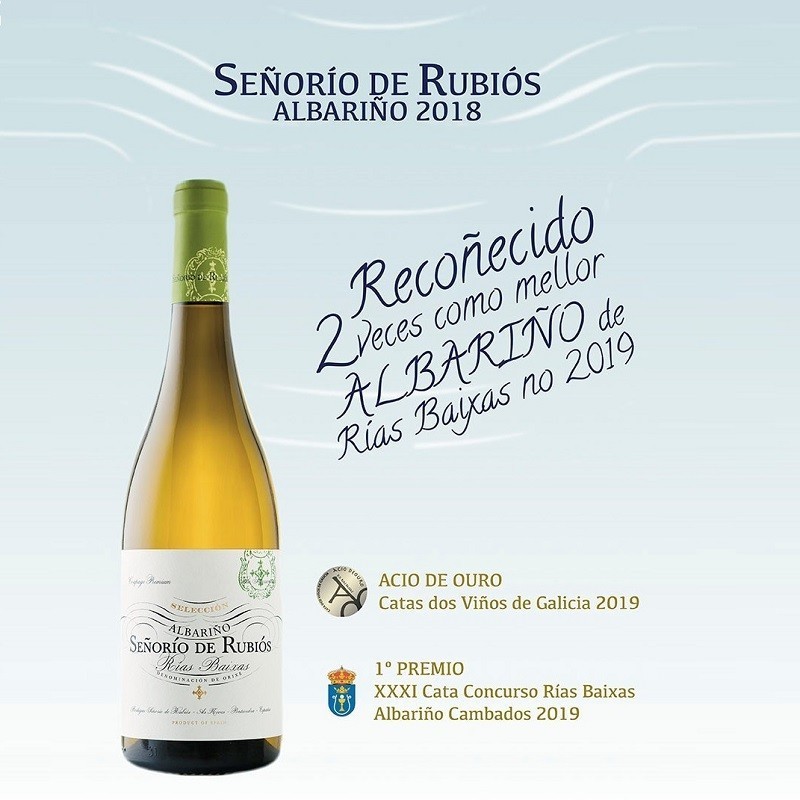 Rating: Be the first to write a review!

Señorío de Rubiós looks at the eye with a straw yellow color with greenish sparkles, it is clean and bright.

In the nose it offers a high intensity, it is very fragrant, fruity and floral, fresh and clean, reminiscent of the fruit of a bone (peach and apricot).

In the attack in the mouth it is a very powerful, clean, silky and glyceric wine with a very well integrated acidity. It has a good structure and smoothness.

In the XXXI Tasting Contest Rías Baixas Albariño, which was framed within the program of the LXVII edition of the participated a total of 59 brands. These were analyzed by 22 experts, belonging to both the internal panel of the Regulatory Council and an external panel.

Señorío de Rubiós is a 100% Albariño wine made with grapes from the O Condado subzone harvested in its optimum state of maturation and sanitation.

The Señorío de Rubiós vineyards are located in the Miño river basin, 200 meters above sea level and on the hillside of Monte San Nomedio, in the small Pontevedra parish of Rubiós, belonging to the As Neves Town Council.

The winery was born from an ancient idea that hovered several neighbors in the area who had in mind to make a winery to be able to sell and promote the well-known Rubiós wines, which all they needed was an exit platform to the market. Thus, at the end of 2003, 57 people, the first partners, laid the foundations for this idea and founded the Coto Redondo Winery, which currently already has 105 members, who work to place Rubiós wine in the place that has always corresponding, by tradition, by history and by the quality of its wines.

Parallel to the creation of the Winery, Viticultores de Rubiós Sociedad Cooperativa Gallega was established, whose partners, the winemakers, would contribute most of the grapes to the winery in order to produce their wines: Rubiós wines, County wines.

Be the first to write a review!